I was going to do my usual Friday Blast Off, but somehow calling people jackwagons and fucktards while actively wishing for their demise seemed inappropriate the day after a holiday designed to give thanks for all of the good things we have.  And I do have a lot of good.  So instead, I decided to turn the tables on myself and explain why I was a tuba playing elk in junior high school.  So at least if you were having trouble being thankful for something, you can now be thankful that you weren’t me in 1991.

Before I begin, I need to point out that in doing some research for photographic evidence of what a complete and utter spaz I was at twelve, I unearthed my eighth grade yearbook.  So keep in mind, if you went to junior high with me, I have proof that you probably weren’t as cool as you thought you were, either.

Anyhow, not long ago, myself, my husband, and our friend were watching a Notre Dame game.  Notre Dame scored, and the marching band began playing the fight song, which happens to be one and the same as the Grove Junior High fight song.  I apparently had some sort of trauma-induced flashback and blurted out, “Hey!  This was the fight song for my junior high school!  Did I ever tell you guys I was the mascot?  I got to wear an elk costume!”

The words weren’t even out of my mouth before I frantically tried to swallow them, wishing fervently for a time machine that would take me back 40 seconds so I could remind myself to think before speaking.  The damage was done, however, evidenced by the sputtering kind of laughter that is generally only employed when men are watching other men get hit in the junk with a golf club.  I spent the rest of the night sulking, being honked at sporadically, and answering questions such as, “So, did you have to try out? ”  “Did you get your own antlers?” and “Wait, so you dressed up as an elk AND played the tuba?”

What? I totally got to stand next to the cheerleaders.

Ah, the tuba.  My poor, wonderful parents.  See, our junior high school band was (this part’s not sarcastic,) really, really good.  We won competitions all over the place.  When I originally entered junior high, I played the flute, like a normal preteen girl would want to do.  It’s cute and feminine and everyone loves flute players!  (Right?) That’s an appropriate instrument for a clumsy, uncoordinated tard with braces and glasses.  It lends some respectability.  However, there were approximately 40 other girls with the same idea, and I wasn’t very good at it.  Not bad, but not good enough to stand out.  (And with my looks, I needed to SHINE!)  So, the story goes that the week after my parents paid off said flute, I came home, brimming with excitement, “Mr. J. wants me to play the TUBA!!!  There’s only like two people who play and he thinks I’d be great at it!!”  Kissing their money and time invested in the flute goodbye, they did not try to dissuade me other than a, “Tuba, huh?  You sure about this?”  The following week, I enthusiastically carried my rented tuba home – walking it about eight blocks from my school to my house because so great was my excitement at being a tuba player that I was not willing to wait until one of my parents could pick me up.  To this day, there’s probably still people in Elk Grove laughing at the day they saw the braces-clad nerd wrestling a full size tuba down the sidewalk, stopping intermittently to test it out. 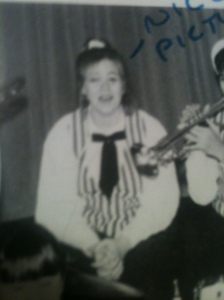 Tuba not pictured. But you know what makes a tuba player hotter? A striped vest and bowtie.

It must be said, although I realize I’ve lost what little dignity and respect I had, that I KICKED ASS at the tuba.  It’s a very slight silver lining on the storm cloud that was my adolescence.

There was a relatively protracted conversation yesterday led by my sister as to why in the hell my parents let me do these things.  And by conversation I mean she yelled, with tears of laughter rolling down her face, “What the hell is wrong with you?  WHY DID YOU LET HER DO THAT????”  while my husband helpfully interjected, “Wait, you didn’t quit the tuba when you became the elk?  Seriously???”  My mother admitted that even she questioned it at the time but apparently my 12 year old self had so much self confidence that not only was I not embarrassed, but had such enthusiasm and pride in my esteemed distinctions as “Elk,” and “Tuba player,”  that they didn’t have the heart to squelch it.  Which, while extremely sad for me as now these pictures still exist, was kind of kickass of them.

So apparently my “awkward stage,” lasted considerably longer than most and had some more notable pinnacles of dork than most.  I turned out fine, right?

Me holding onto a stripper pole in Vegas. Please note I am still carrying my purse and, while not pictured, am wearing flip-flops. Go Team Awkward!