I know you’re busy this time of year.  I know you’re probably inundated with adorable letters from adorable children; children who have probably spent their year trying to be good instead of calling people doucheboxes on the internet and secretly harboring fantasies of tripping people on the bus that were mean to them like I have.  So I’m not going to ask for anything too crazy or expensive, because I just might not deserve it.  But I’ve put together a list that I think will benefit everyone should you choose to grant any of my Christmas wishes.

2.  A do-over button on Candy Crush for when you notice the move you should have made right after swiping out something useless.

3.  A worldwide, yearlong ban on Kanye West’s name being mentioned in the media.  If any media outlet slips up and runs a story on him or even says his name, they face a punishment of spending an entire day with him and Kim telling each other how amazing, special, and talented they are.  No breaks, even for vomiting.

4.  The Blacklist should be a weekly show all year long – none of this “Season Finale” nonsense until we find Red.

5.  A pop-up box on Facebook anytime a user tries to share a story that says, “Are you sure?  Have you checked Snopes?”

6.  Speaking of Facebook, AnE1 WhO PoSTs a STaTus ThAt LoOks lieK DIs has to go back to third grade for two days.

7. Ditto to anyone who says “supposably,” “irregardless,” or “Valentimes day.”

8.  Every year at this time, we retire one awful Christmas song in the rotation and replace it with a new, good one.  This year I vote we switch “Wonderful Christmastime,” with “Underneath the Tree.”  Sorry, Sir Paul, but Kelly Clarkson rocks that shit and your song?  SUCKS.  So hard.

9.  My neighbor to please drop his new habit of whistling like a mass murderer as he’s walking up the stairs in the middle of the night so as to ease my night terrors.

10. Please let Jay Cutler not throw any interceptions in the endzone this Sunday; I simply cannot handle any more controversy.  (I know this will happen before Christmas, but trust me as I believe in you, if you lived in Chicago, you would feel my pain.)

11. Every news story about a celebrity or athlete being arrested or just generally being a moron is to be counteracted by a story of an athlete or celebrity doing something good.  There are more like Andre Johnson than there are like Lindsay Lohan.

12. Anyone cataloguing the triumphant exploits of their Elf on a Shelf must also show the aftermath, whether that be the cleanup or the careful explanation of why Elfie was in the car with Barbie to begin with.

13. On a personal note, I would like a nonstick pan.  And by nonstick pan, I mean nonstick even when it comes to eggs, or at least an honest advertisement which states, “Nonstick unless you are cooking eggs, in which case you’re going to be really mad trying to clean this.”

Pretty please Santa?  If you can’t accommodate them all, maybe just a few?  Or if you only pick one, can it please be the Kanye ban? 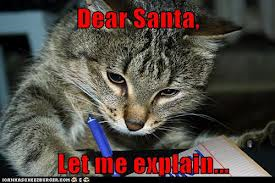 Also, can I get my cat to sit still long enough to take a fun picture like this?