Freedom of Speech is a Species?

So Phil Robertson doesn’t agree with homosexuality.  He thinks it’s a sin.  He thinks bestiality and sexual promiscuity morphs from homosexuality.  He’s not alone in his beliefs, if the public outcry is any indication..  And it doesn’t necessarily make him a bad person.  From what we’ve seen on television – which is clearly an excellent, clear perspective on his entire family life and belief system, because if we’ve learned anything, it’s that reality TV is totally like real life – he appears to be a family man in love with his wife.  He has an opinion based on his beliefs and he is certainly allowed to voice said opinion. Just as his employers are allowed to suspend him for doing so.

People.  We can agree or disagree with his opinion; we can agree or disagree with A&E’s decision.  You know why?  Because we have FREEDOM OF SPEECH.   No one is throwing the man in jail.  No one is calling for his arrest.  No one is shutting down GQ for publishing his words.  No one is threatening the journalist.  No one is cancelling “Duck Dynasty,” in fact, I’d wager every single cent I have that the next show they have has the highest ratings of their entire tenure. Phil Robertson got suspended from work for saying something that wasn’t in line with his private employer’s beliefs.  That’s all.

I’m much more concerned that someone who was nearly the Vice President of the United States posted this sentence, “Free speech is an endangered species. Those “intolerants” hatin’ and taking on the Duck Dynasty patriarch for voicing his personal opinion are taking on all of us,” on her Facebook page.

In my opinion, there is a plethora of other reasons that this has become such a hot button issue that involve religion, beliefs, politics, censorship, exploiting sexuality on television, etc., and those are always worthy of discussion.  But this is not an issue of freedom of speech.  People have died for their right to freedom of speech, they have been imprisoned fighting for their right to it, they have dedicated their careers to preserving it.

A man who makes whistles for a living being suspended from his job as a reality TV star is not even on the same planet. 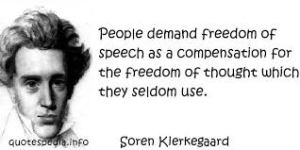