Celebrities I’m Already Tired of in 2013

Here we are in a new year, folks!  Happy 2013!  It’s the time of year everyone’s going to lose weight, stop smoking, get control of the clutter in our lives, and stop watching so much damn TV.  Right?  Bullshit.  Ask me in November 2013 what’s changed since January and I guarantee most responses will be something along the lines of, “Yeah, what the fuck ever.  I was probably drunk when I said that.”  I’m all for resolutions and wanting to better your life, but as I’ve stated before, every time I make them I end up in a pile of Weight Watchers cookbooks somewhere around January 15th, smoking a cigarette, looking for my shoes while partially mesmerized by an NCIS marathon and eating mashed potatoes.

Just me?  Okay.  I can buy that – perhaps some of you actually stick to what you say you’re going to do.  That being said, it’s four days in and I am already irritated by the anticipated celebrity news that’s going to to fucking polarize everyone in the upcoming year.  Here’s a few people that I promise you are going to be sick of by May.

Kim Kardashian and Kanye West and their vile offspring. 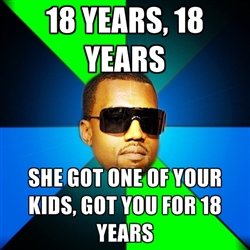 Yeah, cause you’re super excited to hear about this for the next couple of months, aren’t you?  Two of the most irritating, talentless, money-hungry assholes in Hollywood are going to HAVE A BABY???  Well thank Christ cause you know what we need?  More kids that think the world is theirs for the taking despite a lack of any discernable skill.  That’s pretty much what America’s been missing.  And as a service to you, you don’t need to look at a tabloid for the next six months – here’s the headlines.

“Kim to Kanye – Leave Me and My Baby Alone!”

“Bruce Jenner, ‘Oh For the Love of Fuck.  Someone Kill Me.'”

So they’re back together, and super happy about it.  Am I the only one who doesn’t care?  I don’t know what happened back in 2009.  What I do know is that these are two grown adults, both of whom have access to the best resources available for anger management and domestic abuse issues.  If EITHER of them choose not to take advantage, I. Don’t. Care.  Does anyone else not want to hear about this shit for another year?  The only reason these two are stlll relevant is because he beat the crap out of her before an awards show.   I don’t care to follow the rest of this dysfunctional relationship through another year of Grammy’s and VMA’s.  Now we’re going to celebrate their “music achievements?”  Fuck you.  If he was average Joe he’d be in jail (I hope,) and if she were Average Jane she’d be in a shelter.  Fuck you both for glorifying it.  I don’t want to hear about your damn romance for the next year.  Cause I. Don’t. Care.  Have I mentioned that?

Hi.   Perhaps no one mentioned to you two that American Idol has been obsolete since 2008.  And possibly before then.  Ladies?  Paula Abdul quit.  Paula.  Fucking. Abdul.  That didn’t give you the clue this show was jumping the fucking shark?  Ryan Seacrest has replaced Dick fucking Clark and the only reason I can possibly fathom he’s still around is due to a contract signed way before he knew his white teeth, small stature, and radio voice would make him millions.   I’m not disparaging either Mariah’s or Nicki’s talent – they both have it in spades, albeit in different formats.  That being said, Ryan. Seacrest.  Is probably making more on this show than you.  You don’t get to have a diva fight.  Because Ryan. Fucking. Seacrest. is more popular than you two.  Stop judging.  He’s the bigger diva.  Yeah, I know it’s sad.  But I’m not in charge of everything, despite my repeated requests.  Life’s a bitch, girls.

In short, to say that I’m not excited about the celebrity news that’s forthcoming in 2013 might be an understatement.  But unless Justin Bieber and Taylor Swift make a love child, this is what we’re dealing with.

And if I ever have to write “Justtay” or “Biebswift” I’m punching everyone in the ears; I don’t care whose fault it is.

Posted in celebrities, general stupidity, I Will Punch You, Uncategorized